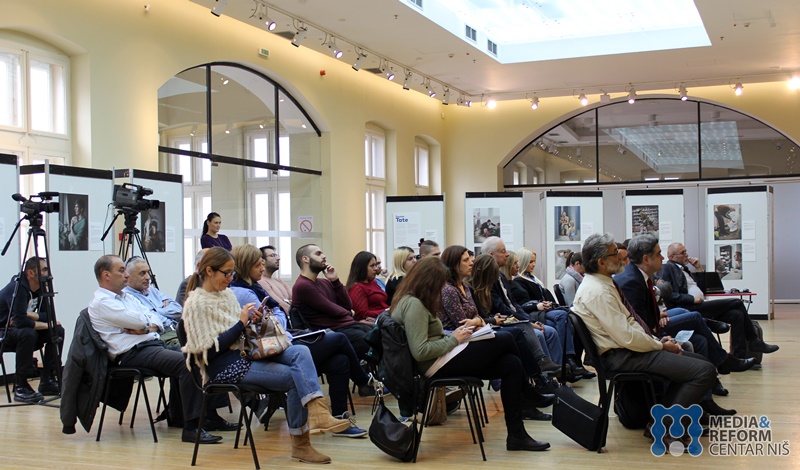 The first event was a photo exhibition “Context”, held on October 25 in Deli Prostor. It was authentic because there were two copies of every photo, but with completely different titles. The goal was to show how only one headline can completely change the perception of a particular photo, and point out that it is important to think about and to know the context of media content.

Visitors said that it was hard to guess which title was true and which was false, especially for photos from events that they were not familiar with. “It’s incredible that the power of manipulation can be so great! I  was convinced that some false titles were actually true”, said one of the visitors.

Dimitrije Nikolić, Vanja Keser, Saša Đorđević and Ivan Dinić are the photographers whose photos were exhibited. This exhibition will become a permanent setting in Media and Reform Center Niš.

About 40 people visited the opening of the exhibition, and more than 100 in the following days. Expect seeing the photos, visitors were also informed about media and information literacy by promo materials that Media and Reform Center Niš created, and by the speech of Zoran Aracki, a longtime journalist, editor, and professor of Media Literacy. As this was the first event of the Media and Information Literacy Week in Niš, many media were present, and the most important for the promotion of this subject was an article of the news agency Beta.

In order to encourage students to think about the importance of the media in modern society, at the Faculty of Philosophy in Niš on October 26, a discussion Perspectives of Media Literacy was held. Students of the Faculty of Law and the ones from the Faculty of Philosophy had three-minute speeches in front more than 50 students, on the following topics – The Importance of Media Freedom, Censoring the Internet, The Right to Privacy and Implementation of the Media Literacy in the Education System.

Participants of the panel agreed that:

Expect hearing students opinions on the topics mentioned above, and getting important inputs on media literacy from young people, this event was significant because of fostering cooperation within civil sector and academia. A local television Niška televizija reported on the event.

High school students also had the opportunity to discuss media literacy at the Svetozar Markovic high school, when the fourth episode of the documentary series The Importance of Media Freedom – Law in the Service of the Media, Media in the Service of Citizens was shown. After the documentary, the discussion was held and high school students were eager to talk about media. There were more than 100 students and teachers present.

Conclusions that were made at this event are:

During the weekend citizens were able to get information on media and information literacy in Obrenovićeva street, where volunteers of civil society organization Shtek House presented them the importance of critical thinking when consuming media content.

500 fliers were spread, and main conclusions are:

What is media manipulation, how to deal with false news, how to understand the media, and why some news is being delivered at the certain moment are just some of the topics discussed during the event Understanding the Media. The teaching assistant from the Faculty of Philosophy in Niš Neven Obradović and Marija Marinković from the EU info point moderated the discussion, and mainly students of journalism and communications participated. A part of the event was joint reading and analysis of media content. Main conclusions are:

Day 7 – October 31, 2017 – Joint activity of the local media on media and information literacy

The media, journalists, and media workers were invited to share media content on the importance of media and information literacy with hashtags #GlobalMILWeek and #MILCLICKS. The most responsive were journalists, from their private social media profiles and media led by students.

The event started by speeches od professor Nebojsa Randjelović, Assistant Mayor in charge of higher education and relations with the academic community, and professor Zoran Jovanović, Head of Department of Communication and Journalism, Faculty of Philosophy, Niš.

Tatjana Djukić from Media and Reform Center Niš, who was the coordinator of the Media and Information Literacy Week in Niš, was moderating the discussion. The audience was very active. There were more than 50 people in the audience and a wide news coverage.

Main conclusions of the event were:

Media coverage on The Media and Information Literacy Week

This week’s events are just a part of the activities that Media and Reform Center Niš does with a goal of implementation of media literacy in the education system. One of these activities is also the Multimedia School of Journalism, where young journalists learn about the media and get the first practical experience. Also, it is important to stress the cooperation with the civil society organization from Brussels – EAVI, which advocates the participation of citizens in public life through the media, whose motto is „Investing in media literacy is investing in people.“