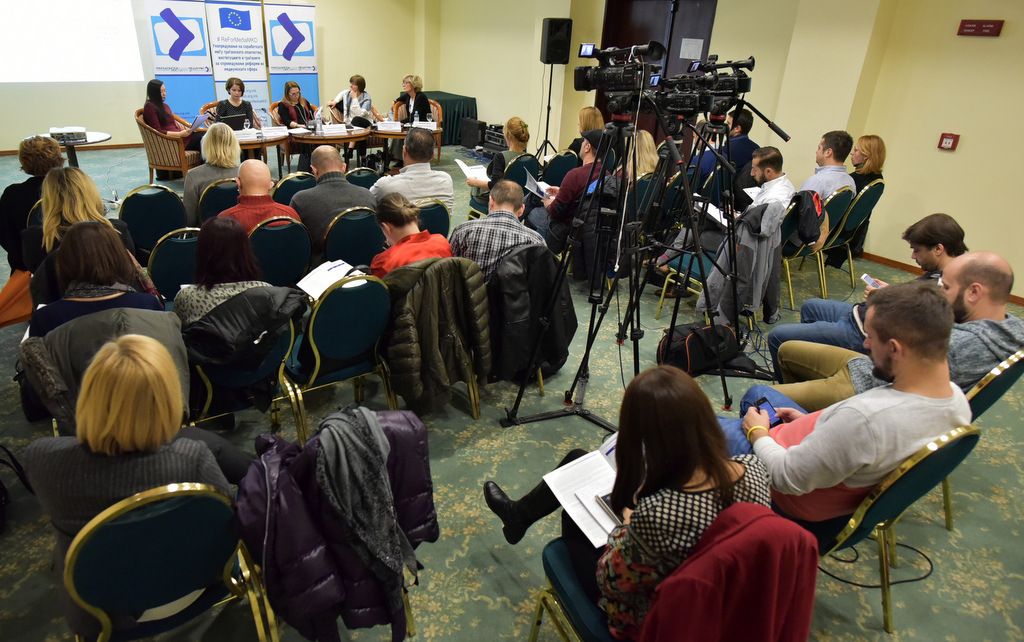 An open public discussion on thorough operational reform of the public service broadcaster, Macedonian Radio-Television (MRT), and on its future development, is necessary, so that it becomes a modern European public service. An open public competition should be conducted for the election of members in the Public Service Programming Council, in order to reduce direct political influences. Moreover, all stakeholders should consider increasing the number of members in this body, to ensure a more appropriate representation of the various segments and interests in the Macedonian society. In addition, the direct entry of certain members, the reviewing of the ban on participation of public service employees in the Programming Council, as well as the introduction of the so-called staggered term of the members should also be taken into consideration. MRT should promote transparency in its work and develop channels and mechanisms for communicating with the audience.

Snezhana Klincharova, the President of the MRT Programming Council, noted that by abolishing the broadcasting fee, which is contrary to the recommendations of the European Broadcasting Union (EBU), the independence of MRT could be at stake. According to her, with the new 0.5% funding allocated from state budget for 2017, there would be less funding for this broadcasting-house in comparison to 2016, which would also be reflected in the program quality. In addition, Klincharova highlighted the problem arising from the agreement between the political parties “Przhino 2”, which believe the second channel of MTV should be completely transformed into an Albanian language programming service, the launching of which, according to the analysis, would require EUR 5 million.

For Brankica Petković, a representative from the RTV Slovenia Programming Council, “the lack of transparency in the work of this body is absolutely unacceptable”. “The sessions of the Programming Council of RTV Slovenia are announced, and the session is publicly broadcasted. Our task is to react if something is wrong and if certain ethical working standards have been violated. We should not send a signal to the citizens that everything could be broadcast, because that violates the reputation of the public service broadcaster, and consequently the confidence in the PBS”, said Petković. According to her, it is very important for the president of this body to be a person with integrity, high ethical and moral values ​​and high intellectual potential.

According to the experience in both Slovenia and Croatia, the abolition of the broadcasting fee and the financing of the public service broadcaster from state budget is not a good solution. “If necessary, this can be a temporary solution, until a stable and lasting solution is found. Both Slovenia and Croatia testify that 90% of citizens pay the fee. Paying a broadcasting fee is like paying for education or health benefits. This way, you pay for the protection of journalists in the public service. RTV Slovenia has its own fee collection service. Still, the public service broadcaster must not spread ‘venom’”, warned Petković.

The participant from Croatia, Mirjana Rakić, who is the former President of the Croatian regulatory body, as well as former director and editor of HRT, believes that “a connection should be established between the citizens and the public service broadcaster”, so that the citizens see the PSB as their own, and consequently have confidence in it and thus protect it. She informed that HRT’s Programming Council has no influence on the programme, i.e. they can only debate, and the Ombudsman only has an advisory role. Both Petković and Rakić ​​agreed that the decision where the Director General is elected by the Assembly, as is the case in Croatia, was not a good model that met European standards.

The analysis and the debate are part of the project “#ReFormMedia – Improving Cooperation among Civil Society Organizations, Institutions and Citizens for Conducting Reforms in the Media Sphere”, implemented by the Macedonian Institute for Media and the Peace Institute from Ljubljana, and financed by the European Union.

Photo gallery of the event is available here.