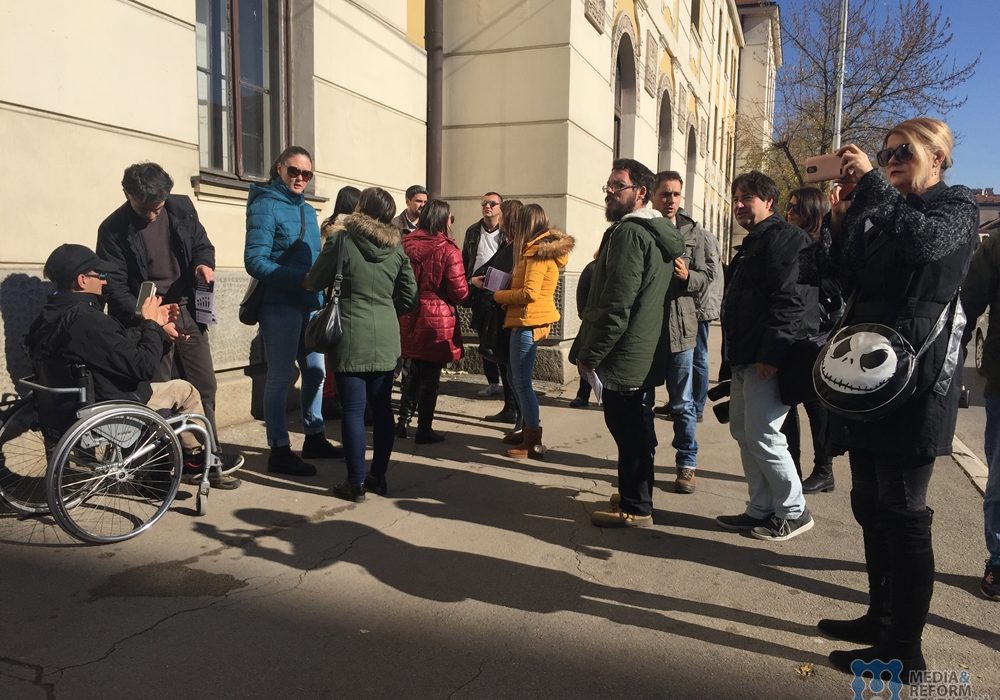 More than 250 attacks, threats and pressures against journalists have been reported during the last 5 years in Serbia. Because most of the court proceedings are still pending, the International Day to End Impunity for Crimes Against Journalists in Nis was marked in front of the Court Building. Fliers with information about unexplained attacks and the increasing number of threats against Serbian journalists were distributed by journalists and activists.

To mark this event,  the journalist Predrag Blagojević, editor-in-chief of online portal Južne Vesti and president of the Association of Online Media in Serbia, stated:

„The question nowadays, as it appears in the public sphere, is what the Government should do, in order to stop pressures against journalists… Well, to start with, the Government should stop pressuring journalists. Today is the International Day to End Impunity for Crimes Against Journalists. Who is responsible for not punishing those threatening journalists, attacking and even killing them? That’s our Government. Those are our Governments. I think citizens are not at all aware of the role of journalists. And when somebody threatens a journalist, he doesn’t only threaten  that one person. He threatens tens and hundreds of thousands, even millions of citizens who follow that journalist’s work and are being informed by him. Basically, citizens should fight for media freedom, not journalists“, explained Blagojević. „This is not a union meeting, this is a gathering meant to deliver this message to citizens, not to the Government. The Government is aware of this, and it will continue its present actions, in wait of benefits. Citizens should understand the meaning of the Government behaviour, and should step up and take action“, he concluded.

Along with events in Niš, awareness activities  for the International Day to End Impunity for Crimes Against Journalists were also organized in Novi Sad and Belgrade, by The Group for Freedom of the Media – with the participation of hundreds of organizations, journalists, media associations, and citizens fighting for free media in Serbia.

In Belgrade, activists of The Group for Freedom of the Media, who gathered outside the Public Prosecutor’s Office, distributed leaflets to citizens pointing to the cases of unsolved murders of journalists Radosava Dada Vujasinović, Slavko Ćuruvija and Milan Pantić. The same material was handed over to the prosecution itself.

Program director of the Slavko Ćuruvija Foundation, Ilir Gaši, said that there is clearly an increasing tendency in the number of attacks, but “not the same tendency in terms of efficiency in addressing these cases by institutions.”

During marking the International Day to End Impunity for Crimes Against Journalists, journalist Darko Šper reminded that the regime tabloids are leading an orchestrated campaign against journalists doing their job professionally, targeting them as traitors and foreign mercenaries. “The absence of penalties for attackers not only affects the work of journalists, but also indicates the Government as purposely undermining the freedom of the media and citizens’ right to information”, said Šper.

According to UNESCO, in the last 11 years, 930 journalists have been killed around the world: “On average, this constitutes one death every four days. In nine out of ten cases the killers go unpunished. Impunity leads to more killings and is often a symptom of worsening conflict and the breakdown of law and judicial systems”.

Four years ago, the United Nations decided on November 2 to become The International Day to End Impunity for Crimes Against Journalists, a date when all the world Governments are called upon to take responsibility for not punishing the attacks against journalists.