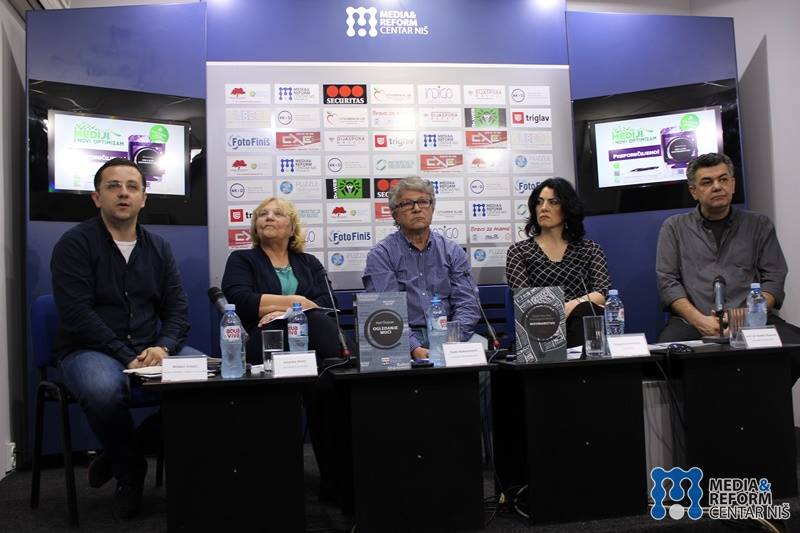 The bad state of the media is not just problem of journalists, but the whole society – is one of the conclusions of the discussion “Journalist profession: from the universal know-it-all to the proud ignorant”, organized by IP Clio and Movement Novi Optimizam, held on May 23 in Media and Reform Center Nis, to celebrate the twentieth anniversary of edition Multimedia.

It was talked about the problems that journalists face in Serbia, the dignity of the profession, standards and solidarity, populist social environment and politics of intimidation, pressure, controlling the media, and freedom of journalists…

Jovanka Matić, the media researcher, said that journalism in Serbia has two problems nowadays, concerning the professional identity and integrity of journalists. She highlights the fact that journalists are not aware that the new technologies will have a major impact in changing the journalistic profession as a global problem:

“We are witnessing a technological revolution that completely changes the role of journalists in society. Journalists are no longer what they once were – an exclusive player that has the right to hold the key to the public sphere. Second, Balkan and specifically Serbian problem, relates to the social environment, primarily political, in which journalists work, and which is populist.”

Matić points out that populist regime is in power in Serbia, where the media can be only a megaphone, amplifier of messages sent by the leader. “Pluralistic media are a natural enemy of the populist Government”, with which Rade Radovanovic, journalist, and playwright, agrees:

“Subject of the media and position of journalists are one of the many tremendously serious topics in Serbia. The current Government which is increasingly embodied in the supreme leader and the lord tries to extinguish all that is a glimpse of facts or the truth itself” underlines Radovanovic, and adds: “In such a society the media role and the role of the journalists is called into question.”

The process of media privatization in Serbia, as Matić points out, was completed by an economic capture of the media, while additional problems are rudeness and haughtiness with which the populist leader reacts to the sole idea of free and independent media. “Being a journalist in Serbia involves personal sacrifice and courage,” says Radovanovic, who is consistent with the journalist Gordana Susa, who states that anyone who’s worth something and holds to the dignity of the profession has a big problem:

“The victory of journalism was an abolition of the offense of opinion – the famous article 133. Now those things are slowly coming back, and through the back door the offense of opinion is being introduced again.” As Suša emphasizes, in the beginning of media democratization intensive work was being done for the struggle for human rights, while today the focus of media is profit. “Information is a fundamental human right, but it also is a merchandise, which is being sold. Today, for the sake of profit human rights are often being violated. It has been calculated that the newspaper Informer had the word war on the front page 8 times in just the past few days.” She explains that the objective of such media policy is to intimidate, what becomes the state model.

Professor of Faculty of Philosophy of University of Nis Ph.D. Vladeta Radovic, states that beside the populist regime and policy of intimidation another problem is the fact that “courtship to vulgarity is paradigm of today’s media scene in Serbia“, which leads to how Zoran Hamović, editor in chief of IP Clio says “superiority of inferior”.

“The consequence of this situation in society and in the media is the fact that we are threatened first as people, then as citizens, and then as professionals,” says Mladen Velojić, Director of Media and Reform Center Nis, and moderator of the discussion.

“There is a necessity for the minimum standards of the profession”

Radovic insists on agreement on the minimum standards of the journalism profession, as well as on controlling the media, but not by the state but by society. However, Radovanovic is skeptical: “The man who is reduced to biological survival, or citizen who is existentially threatened, can hardly think about their positions,” adding: “The ghost is too long out of the bottle, and it’s TV Pink in all its publications and all what it is about,” and believes that the solution is not controlling the media, but obeying the law and professional standards.

“Ones who can not stand the pressure are free to go”

According to the census of UNS and NUNS, there are about fifteen thousand journalists in Serbia nowadays. “And there are even more those who claim they are journalists, but in fact they are not,” says Suša, and adds that on the question of what it takes to be a good reporter, she didn’t change her answer in 40 years: “Except higher education, great curiosity, extraordinary psycho-physical condition is necessary. The journalist must be mentally strong to resist all the pressures.”

Dragana Sotirovski, the journalist of a public service RTS, who was subject to threats due to her reporting, says that her case could be an example of a fact that every journalist works in the way he thinks he should. “I responsibly claim that journalists are to blame for their situation. There has always been and there will always be some lord, unfortunately. But lords change, journalists remain. The only question is how much do you allow someone to manage what you are doing. Ones who can not stand the pressure are free to go.” Sotirovski points out that there are numerous ways to deal with this problem, and there are also European institutions that threatened journalists can contact, but collegiality is necessary above all.

Professor Jovanka Matić explains the low level of solidarity of journalists and disunity of profession by the fact that there are three different professional ideologies in the Serbian journalism: propagandist, commercial and sensationalist and socially responsible, with which Sotirovski does not agree, arguing that a journalist can not be classified into one of these three categories.

However, all participants agree that chronic non-attendance of journalists and represent of a certain media on events where the problems of the profession are being discussed, and ignoring reporting on them, is another illustration of the dark media scene in Serbia.

Also, it was concluded that the obligation of citizens and, above all, journalists is to advocate media literacy because the struggle for media literacy is the struggle for critical thought. Considering this, Hamović invited organizations and institutions to sign the Declaration on Media Literacy, which will highlight the requirements and recommendations to the competent authorities about a clearer and more efficient determination of state policy in the field of media literacy. Media and Reform Center Nis joined as a signatory the first signatories of the declaration – the Independent Association of Journalists of Vojvodina, IP Clio and Movement Novi Optimizam.

This discussion was the second in a series of talks entitled New Media and optimism, which aims to open a public debate about the social status and influence of modern media, media culture, and professional situation of journalists. The following discussion titled “Spin is dead, long live spin” will be held May 30 in Novi Pazar.