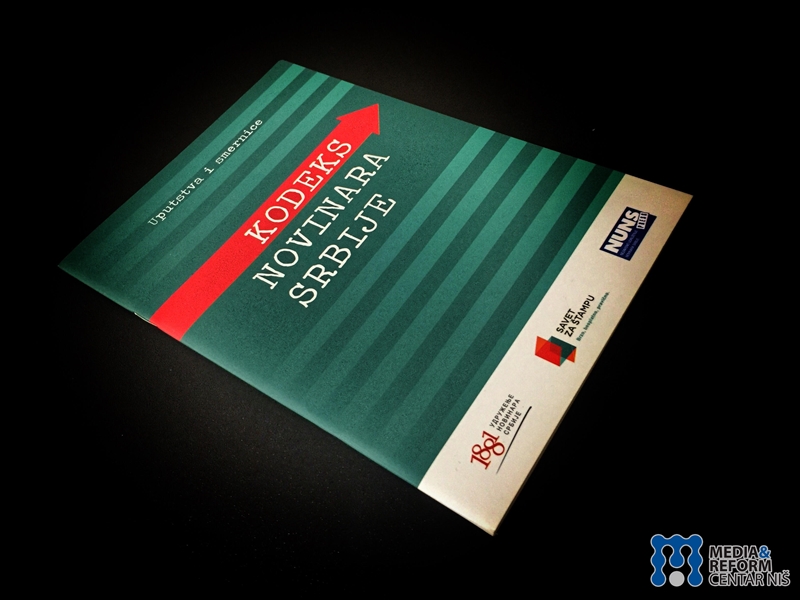 Outrageous, unprecedented, spectacular and you-won’t-believe news, are part of everyday headlines in Serbia, which report about the monsters, liars, criminals, and with plenty of grisly details and testimony of anonymous, reliable, sources. Rules that other side needs to be heard, privacy of the persons in question should be respected, and unfounded accusations and slander shouldn’t be published, often remain forgotten in the textbooks of journalism ethics.

In 2016 The Press Council in Serbia got 126 complaints, and the Board decided on 82, given that some were resolved by mediation, and some were rejected for formal reasons. Violation of the Code of Ethics of Serbian journalists was found in 62 cases, precisely in 75.6% of analyzed complaints. “The media respond differently to the Council’s decisions. Sometimes they are very critical and they react “unsportsmanlike” on decision of the Board that they have breached the Code. Sometimes they get angry and challenge the decision, and sometimes even the credibility of the Board members,” says Gordana Novakovic, Secretary General of the Press Council.

Based on the Board’s decisions, most often, more precise in 86.58% of the analyzed cases the chapter Truthfulness in reporting is violated, mainly points 1, 4 and 5. Point 1 defines the obligation of journalists to “accurately, objectively, comprehensively and timely report on the events of interest to the public, while respecting the public’s right to know the truth and adhering to basic standards of journalism,” while point 4 states the duty of journalists to “where necessary, consult as many sources and enable them to express their views.” In paragraph 5 of chapter Truthfulness in reporting it is stated that “unfounded charges, libels, rumors and fabricated letters or letters whose author is unknown or his identity is not verifiable are abhorrent with journalism.”

Violation of some of the the principles of the Code is also a violation of the law, such as, for example, non-compliance with the presumption of innocence, which was noted in 8 cases analyzed by the Commission in 2016. Invasion of privacy occurred in 26 cases, while the violation of ethics and culture of speech, and discrimination was acertaind in 11 cases.

Professor Zoran Aracki explains that we are, as a society, still immature and have no criteria by which we can be tolerant to different opinions and views, and adds: “Journalists often report stereotypically, which can lead to biases, and prejudices can lead to catastrophic events, what happened during the war in this region. In my opinion, an extremely sensitive topic in one of religious tolerance. This is a problem for Serbia, especially for Novi Pazar, Raska, Vojvodina, where a far greater degree of tolerance is needed.” Aracki also points out that journalists should not turn the events that are provocative into trends, but report on them as individual cases, without overemphasis which could cause additional social problems.

Annual monitoring of the Press Council shows that in 2016, eight daily newspapers violated the Code of Journalists of Serbia in 5477 texts, which is 38% more than in 2015.

“What is particularly challenging is that we still do not see that the media are guided by the Commission’s decisions, specifically that they do not take them into account in further work, which is one of the basic ideas of self-regulation – to point out the error to the media, so it could be avoided in the future. Media in Serbia, unfortunately, repeat mistakes, even when Board repeatedly draws attention to the problem, “says Novakovic.

According to the decisions of the Board of the Press Council, daily newspaper Informer had most violations in 2016. Informer broke The Code of Journalists of Serbia in 12 analyzed complaints.

“Media who have not accepted the full authority of the Council, often ignore decisions, while the media who accepts jurisdiction are still prone to occasionally “forget” that they should publish the decision of the Council, and we have to remind them, and it is often without results,” explains Gordana Novakovic.

Except the “forgetful” ones, there are cases where editors find that it is enough to remove the content in question. Nikola Panic, editor in chief of Gradski portal 018 from Nis, media which violated the Code in 2016, states: “We believe that we have not violated a single code. We have removed the text from the website, and as far as the decision of the Press Council, we did not publish it. The Press Council is a working body which is not official, but the association, and there anyone could make a decision. We removed the text to show respect, but we did not announce any decision, because we do not want to popularize anyone,” and adds: “This is our only complaint, except one from the Juzne Vesti for unsigned photograph, which we subsequently signed. We had no other complaints, as opposed to other media.”

Also, Aracki notes that even those who founded the Council and determine the rules often do not comply with the provisions. However, he points out that “the existence of the Press Council is extremely valuable, and it is good that there is a form of self-regulation of the journalistic profession.”

In the text Unprofessional Conduct of Journalists and Media (Human Rights in Serbia in 2016, Belgrade Center for Human Rights) Ivan Protic, journalist of many years standing and media ethics lecturer, stated that the televisions often violate professional codes airing reality programs, and emphasized that the electronic media in Serbia often do not mark if the content is appropriate for a certain age, and they do not comply with law and regulations. Protic also mentions the case of one television from Nis, which broadcasted gatherings of Serbian Progressive Party a dozen times in April 2016, without labels that it is paid or pre-election program, and what they are bound by the rules of the Regulatory Authority of Electronic Media – REM.

Aracki explains that “violations of the Code happen due to the desire for profit, but also because reporters ignorance. This is because of the accelerated privatization of the media. Media owners, of which the largest number is media iliterate, often dictate certain unethical behavior unprotected journalists have to meet, because it’s hard to survive with journalism salary, but it is even harder without it. Therefore, journalists agree to meet certain requirements that are inconsistent with ethical principles, although there are also uneducated journalists who violate the Code as a result of ignorance,” and concludes: “The point is that media education is necessary for all, both media workers, journalists, and editors, in order to create a climate in which ethics are re-affirmed. Because of the profit and the desire to preserve life, we have forgotten many ethical principles, we have forgotten that we are the humens in general, and we turnd into machines for pleasing other people’s wills and desires.”