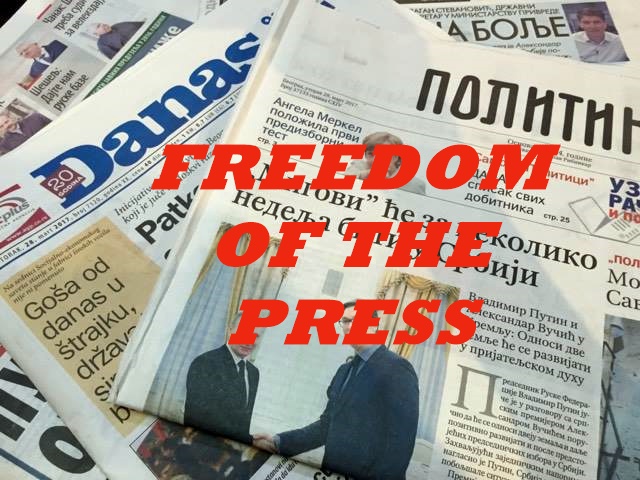 Media freedom in Serbia is like a hot potato for some politicians. On the one hand, it is a good democratic legitimacy in front of the outside world, but, on the other, in the underdeveloped democratic consciousness of politicians, it is a danger for the country and nation, in fact – for their position and power.

That situation, of course, is not a specialty of Serbia, it is present everywhere in the world, but here in our country, especially in the current decade, it is developed almost to perfection. In order to that, media freedom in political life of Serbia is understood as praising of Government, while critical review of authorities is seen as a anti-state operation, working for foreign interests and in the worst case – as betrayal. As Jean-Paul Sartr said – hell is other people.

Intensive using of periphrasis such as domestic traitor and foreign mercenary for journalist and media began in the era of Slobodan Milosevic in the last decade of the past century.

After the peaceful democratic change of government in 2000, former opposition and current government used those periphrasis less frequently, and to control the media and to limit freedom of the media, they used not so effective, but more sophisticated methods. That change enabled development of mild media freedom but also enabled appearance of tabloids and tabloidization of one part of the media.

This, more or less tolerable situation has been interrupted by the arrival in power of the Serbian Progressive Party, which emerged from the ultranationalist Serbian Radical Party, and whose value orientation still tend to promote.

Beside changing the main political orientation – from making a big Serbia to Serbia as an EU member state as a major foreign policy orientation, not much have changed, especially with the media.

Efforts to control the media and to narrow the field of the media as much as possibly can, stayed the same. As in the period from 1998 to 2000, when the Information Minister was the current Prime Minister and presidential candidate Aleksandar Vucic, whose party SRS was a coalition partner of Milosevic’s Socialists. Then he passed rigid Information Act and media law, probably the worst media law in Serbian history.

Insults, harassment, threats, attacks and all kinds of pressure only strengthens. Vucic’s government has been controlling four of six TV stations with national coverage over the past six years. Among them, Pink TV probably the most watched in the country , stands out, with their intensity of the attacks on opponents. Two programs of public TV services are under stronger and more successful pressure. Control over the public TV service in the province of Vojvodina has been established after the overall change in leadership after the parliamentary elections in April last year.

The situation is not better in the regional and local TV stations. Particularly indicative was the case of TV Studio B, which turned from a decent and democratic-minded city television into a rough and primitive propaganda authorities bureau. Thus, media freedom on television is present on cable TV N1, a franchise of the American CNN and rare local televisions.

The situation is not different with the newspaper too. For example, the oldest daily newspaper in Serbia – Politika canceled cooperation with world-famous cartoonists Dusan Petricic because he “often” drew Prime Minister Vucic. Daily newspaper Danas, which tends to present the real picture of the situation in Serbia, has a small circulation and is constantly under the attacks of government and pro-government tabloids, primarily Informer. The tabloid Kurir, which was once the spearhead of government, are now systematically violates the professional standards. The two most important weekly newspapers, Vreme and NIN, are under constant offensive of government. Reporters of Vreme, Danas and critical research networks like BIRN, KRIK and others are a constant target of attacks and threats, including death threats. The weekly magazine NIN at the end of last year, in one of the fastest trials in Serbian history, was sentenced to pay a compensation for mental pain to police Minister because of the statement that he is responsible for some acts of police.

Let’s mention more than 2500 of media reports and articles that had a critical view to the authorities, were classified in the exhibition Uncensored lies prepared by the Prime Minister’s SNS, which indicating poor state of the media freedom in Serbia.

This is confirmed by the following facts. Any criticism is seen as a lie, attack on the prime minister and his family, and even as a coup attempt. Journalists’ questions more often are not allowed at press conferences. But when they did, everyone who is not sycophantic is exposed to harassment and insults, both by the Prime Minister Vucic and reporters, his fans. Critical web portals are often struck down or blocked, it is assumed – by SNS bots. And last, but not least, EU officials related to the negotiations with Serbia about its accession to EU, describe the bleak media situation in Serbia, often very mild, superficial and with overly selected formulations.

From all this it follows that the freedom of the Serbian media have only letter F, the first letter of the word FUNERAL, which is becoming more certain future of Serbian media scene.